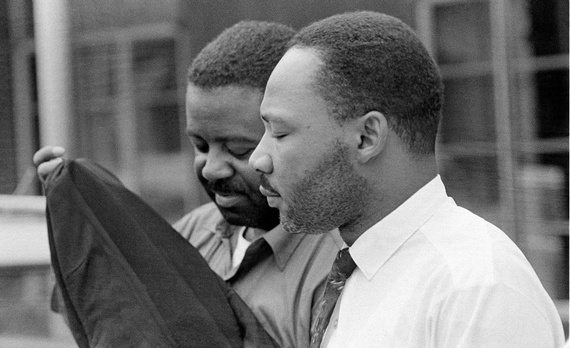 I would suggest that Dr. King’s ideas didn’t change history. Instead, the expression of those ideas, in practice and in form – in marches and essays and in speeches and in film, changed history. So long as those ideas remained in his mind, they’d have been beautiful and inspiring but rather useless.

Dr. King had to create in order to make the impact he did. He had to do the work of taking an idea and making it into something you and I could engage with, internalize, meditate upon and be transformed by. And just as it is with you and I, doing that work wasn’t automatic or easy.

“Letter From A Birmingham Jail” is the first long-form piece of Dr. King’s  I ever read. Rumor has it that the letter was written, at least in part, on toilet paper and other scraps. Having something vital to say but lacking a conventional or convenient way to say it, he made a way with what he had.

It is simply too easy to say “I don’t have enough time” or “I don’t have the proper resources.” But if I have something vital in me, something that can enrich the lives of those I’ve been given to, I have a responsibility of sorts to find or make a way to say it.

What beautiful idea of yours needs to become a work or a practice?
Instead of asking what stands in the way to making that happen, ask what resources and opportunities you do have and start there.