Tennis star Andre Agassi initially learned to play the game from his dad. Legend has it that, during those early lessons, Emmanuel Agassi (who had been an Olympic athlete himself) encouraged the young Andre to worry less about the accuracy of his strokes and instead, hit the ball as hard as he could. Someday, he told his son, the ball would land in-bounds. And eventually it did… often. Agassi became one of the greatest players in tennis history.

Here is something true: Many of your efforts, especially early on, will miss. Don’t let that keep you from putting everything you have into your work. You’ll have to make bad art in order to make anything better. 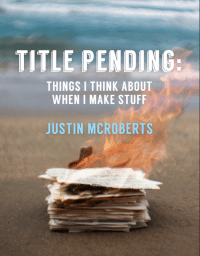