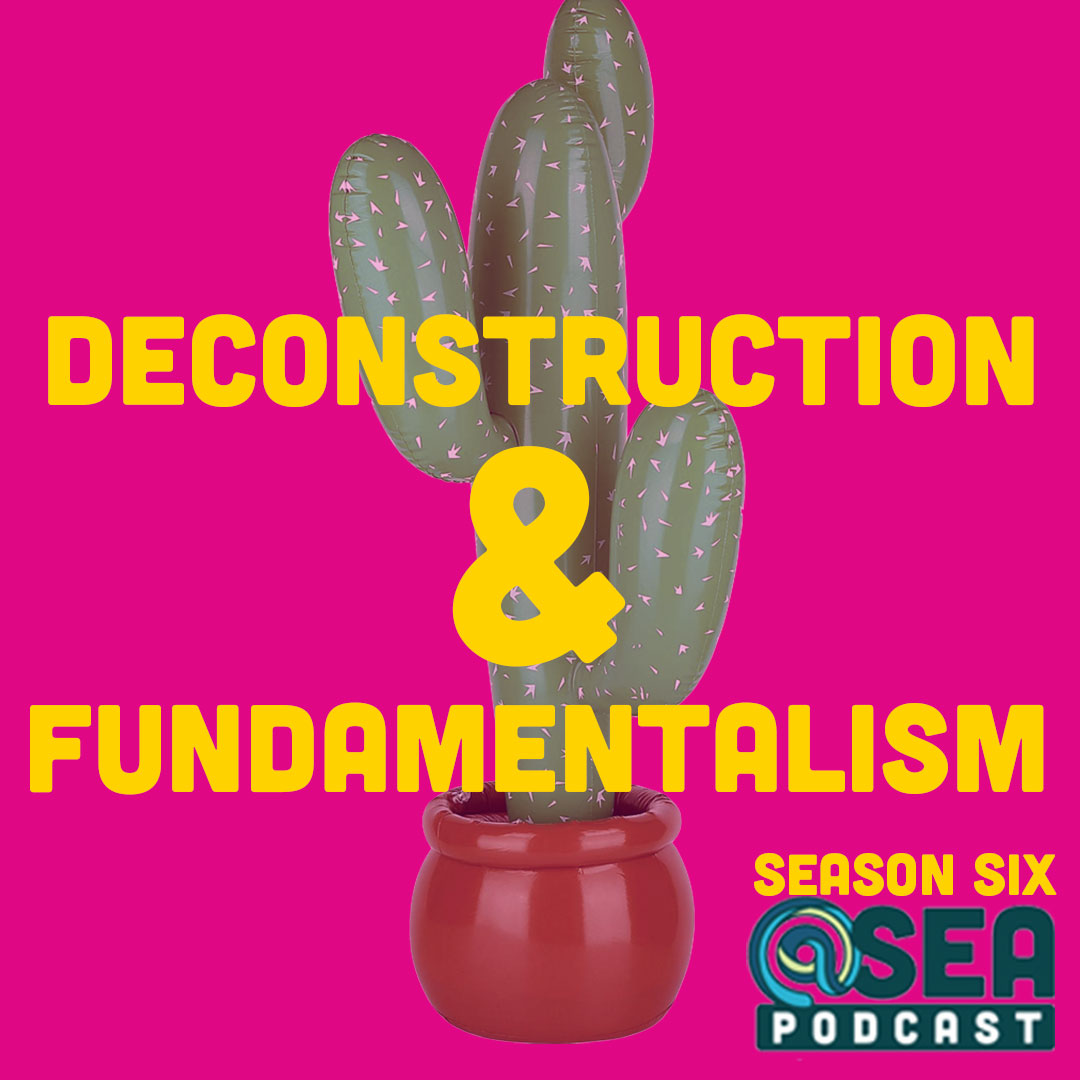 I just got off the phone with a long-time friend who is now a coaching client.

It’s the call I needed in order to finish this script.

This beloved friend began the conversation with the nearly universal phrase: “I feel like I’m always in the middle.”

And I get that.

Even though I disagree a bit.

I don’t think he’s in the “middle,” per se; I think he’s trapped in a relationship with people who hold somewhat opposing perspectives (political, social, theological) and hold those perspectives more tightly and more dearly than they do the people around them.

That’s the actual trauma and tragedy of Fundamentalism; it strips people of their humanity and rends us from those we would otherwise love. I’m not allowed to be on a journey or in a process. I MUST come to conclusions and have some form of certainty. Namely about things the machinery I’ve aligned myself with has deemed most important. |

in 2008, I released a collection of songs entitled “Deconstruction.”

The title was actually a remnant from my collegiate studies in philosophy, where I spent a bit of time around the work and words of Jaques Derrida.

At the time, “post-modernism” was the buzz phrase, particularly as some of its core tenants threatened the seemingly secure hold Modernity had on daily life.

Most western, white-male-dominated cultures stood firmly on the assumption that some things were “True” and, in their being True and immovable.

That assurance meant that the building of institutions and rules of life were safer and would be long-lasting.

What Derrida offered, though, was the suggestion that the language used to communicate and understand those assurances was fraught with contradiction and complexity; that language did not reliably point in the direction of a controlling and anchoring “Truth.”

Instead, words are bound together by the tension and connection found between themselves. There was (and is) no central reference point from which each individual word derives its meaning. More simply, if a word has “meaning,” it has that meaning in relationship to the words around it. And that’s the constant; language and the connection between words.

Some critics read Derrida as one more expression of “relative truth,” but Derrida was up to something fundamentally different; he was suggesting that the “constant” was relationship itself. The relationship between words and between the people who used them.

For example: In a religious context, that Truth might be expressed in a phrase like “God is love. “For Derrida, the wild differences between what I mean by “God “and what you meant suggests a lack of common experience; there is no “thing” to be called “God.” what there is, though, is the connection between you and me. And, in that case, meaning wasn’t to be discovered in a common experience of whatever the word “God” meant; it was forged and fostered in the connection and tension in the relationship between you and I.

He called this “Deconstruction.”

At the heart of his initial work was (and is) a frustration about the inherent desire in human hearts to place “meaning” at the center of existence. That just because we are alive, our lives must have meaning. He found this problematic and sought to undo it.

Derrida saw it problematic that philosophy was driven by the need to find a centering, grounding meaning at all. He bristled at the certainty with which philosophers sought to find meaning somewhere; believing their certainty in any kind of absolute blinded them.

My religious training counters that idea by suggesting that the desire in human hearts to live in and with meaning is a hunger similar to the hunger for food, a thing to actually schedule one’s days around rather than learn to ignore, for really any reason. The details, of course, are negotiable, to say the least; but that nudge at the core of one’s soul that says “there’s more. not just out there, but in you” is real; it’s part of what it means to be human.

And this is why I find myself struggling with the use of the word “deconstruction” as a description for so much socio-religious conversation recently. The way I hear it, I think we’re mostly talking about reorganization and maturity and growing and discernment, all of which is not just fine; it’s good. It’s true. It’s beautiful. And I guess I wish we would let good things be good, sometimes.

Most of the institutional conversations i’m around feature a critique of systems that poorly reflect a central truth or Reality that deserves a better treatment and culture.

For many, churches are problematic, not because they’re organized around a reality that is non-existent, but because their corporeal practices distract from the beauty and goodness of that Reality.

But that’s not deconstruction.

It’s something ( i would suggest) richer and harder and more communal and more fluid and more human; it’s the work part of belonging to people. It is the practice of Beloved Community.

I have long believed that one of the most corrosive aspects of Fundamentalism is that it convinces us that ideas and definitions are more vital and important than the people who hold them.

In that light, Fundamentalism convinces us that change is a necessarily deconstructive process; things are either true or false, black or white, real or not, in or out, Biblical or sinful, sacred or secular – alive to the Glory of and service of God or fit to be torn down and trampled… there is no movement or growth or progress or even redemption; I’ve either got it right, or I’ve got to go.

The glaring feature in that fundamentalist mindset is fear, mostly fear that the center won’t hold if it’s moved or challenged or not protected.

I think we’re seeing a scandalously broad awakening … that this nudge and the fact that I sense it matters MORE than the words some paid professional uses to describe it, control it and commodify it.

What I’m seeing is the fervent and sometimes angry tearing away at whatever artifice is deemed in the way of a clear vision of what’s most real.

I’m hearing conviction and frustration that there is, in fact, a center (though it might not be static) and that there are fundamental truths (though they may be interpersonal in nature) but that all this gatekeeping garbage culture is keeping people we love and like and want and need from the goodness of it.

I don’t mind the word “deconstruction,” but historically, deconstruction is a very specific and often highly individualized process by which one unearths the very core and center of their being and decides that if there is meaning in their world or in their life, it must be constructed and held together by the sheer force of the own, individual will.

So, if that’s you, I get it, and that’s real and can be terrifying and also really good.

But if it’s not, then consider that you might not be deconstructing. You might be feeling an invitation to a legitimate “awakening” to be shared by all kinds of people, with whom you agree and disagree; an awakening angled towards (and maybe even prompted by) a goodness, Truth, and beauty worth tearing things down for… as well as worth building around.