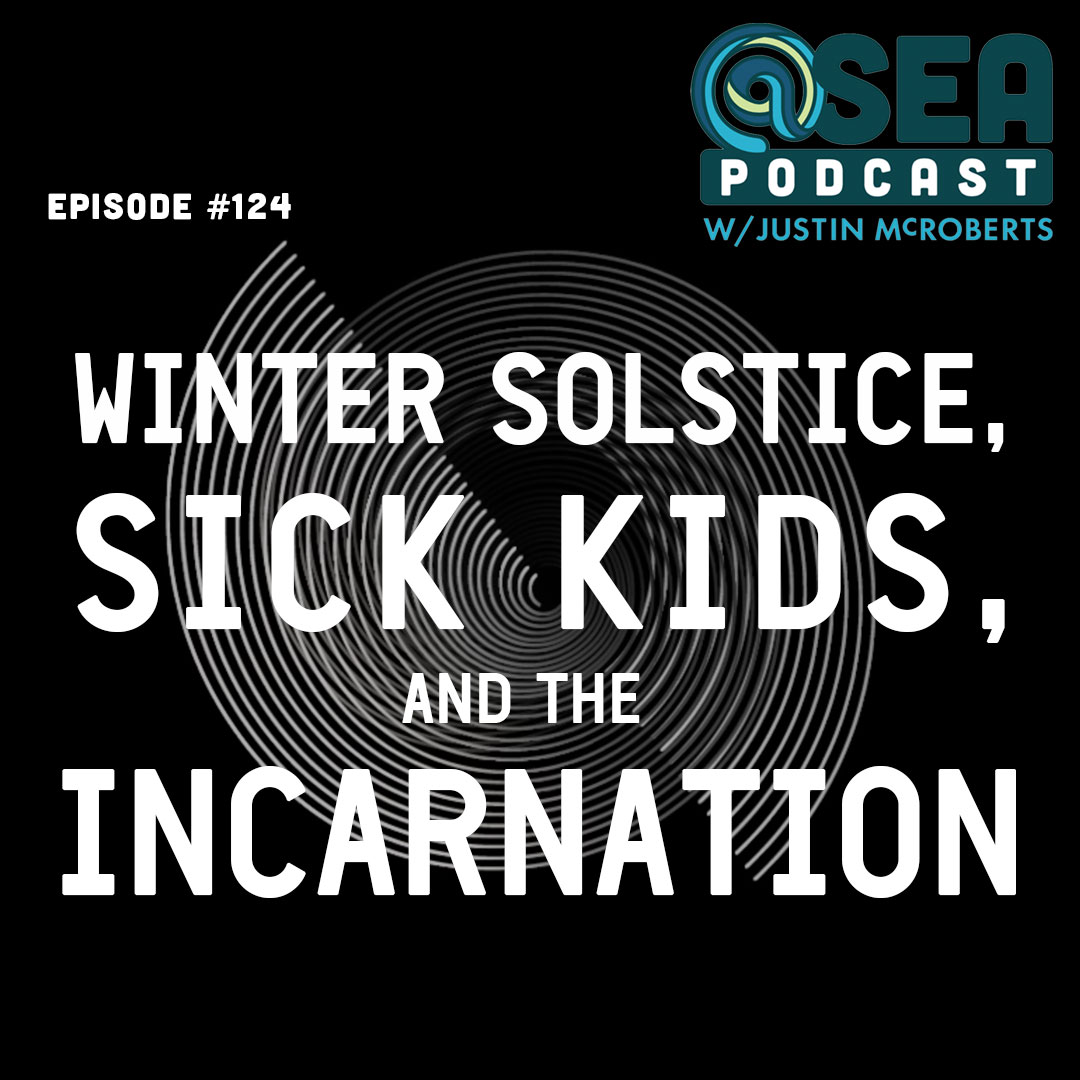 Welcome to the At Sea Podcast. I’m your host, Justin McRoberts. I’m recording this on December 21, 2022. It is the winter solstice, the day where I live that features the least amount of light. The night is longest. And I’ll be honest with you, I’m not feeling great. I don’t know if I quite have the flu yet, but I might. Because my daughter does. And I found that out a few hours ago. It’s been really since Sunday. She wasn’t feeling well on Sunday. She was feeling not so great on Monday, so she didn’t go to school, then she didn’t go to school on Tuesday, and then today, Wednesday. She certainly did not go to school. She has been very sick. Last night, when she went to bed, it was mostly just cold symptoms. That was sniffles, and it was a little bit of a headache. And then she mentioned that one of her ears wasn’t feeling great. Oh, I thought. And not too long ago, her being in bed by herself. She woke up and started vomiting. Her brother came downstairs to let us know that she had, in his words, puked everywhere. So we went ahead and cleaned up what we could clean up. And if you’re a parent, you’re probably not as grossed out as others would be because kid puke is different than other puke in some way. And then, as I was settling her back in and tucking her back, she asked me if I would stay because she was scared. Sure, absolutely. I got my pillow and a blanket. And I laid down on the floor, and I did not sleep really much at all. She woke up every 1015 minutes. She was uncomfortable. She was nauseous, and she threw up a few more times. And I’ll be honest with you, it wasn’t a pain in the butt to get my back hurt. And, like I said, it didn’t sleep, and my shoulders hurt. And you know, I’m almost 50 sleeping on the floor is not my forte. But there was this gift that I was experiencing, especially in the darker, later, deeper hours of the night. I get to be there for her. I get to be the person in the room. When she doesn’t feel well. And a scared. I wanted to be there. So it was a kind of a joy. Speak speaking of joy. In a few days, we, in the Christian tradition, celebrate Christmas, this magical and miraculous celebration of God becoming a person, and I do get it. There’s that I’m aware of the sort of kerfuffle of sorts around Jesus not being actually born in December. I’ve heard it’s June. I’ve heard other things. And that’s fine. I’m not at all saying that that conversation is unimportant in the grander sense or in some grand sense. I will say, though, on a personal level, I’m not all that moved by it. See, what I don’t really care about when I come to religious faith or religious practice are things like exactly where Jesus was born or what the exact date was. I am instead drawn to religion, religious faith, and religious practice. With questions more like when it is darkest when it’s hardest, when it is coldest. Is God not just there? But willfully and joyfully? There when my life is not okay. When I am not okay. In my wife, is God with me? And IS GOD WITH ME joyfully? And happily and willfully. We’ve had a few conversations with Caitlin. Over the last few days, and certainly, today, as this sickness has gotten worse and keeps dragging on, she understands she’s sick. It’s just something that’s part of being human. There are going to be days when you don’t feel well. And sometimes those days run into other days and become weeks. There are just times in life when you don’t feel well. And what she has wanted, honestly, more than medication is to just be around people. That’s what she’s wanted. Does she want the medication? Honestly, she doesn’t like the medication cuz it tastes like crap. It really does. It’s awful. I can’t believe we haven’t fixed that yet. But more than medication, she wants to know that people are going to be with her in her room overnight, on the couch next to her during the day, that if she’s not going to feel well if that’s part of what it means to be human, then will you live that with me and again, this is part of what makes so much poetic sense that we celebrate the incarnation of God. In a time when for a lot of us, things are coldest, and the nights are longest. Not just because we feel more comforted, but like good religion does, it points us forward that if we want to be loving and caring people, when it gets harder when it gets darker, and when it gets colder, what the people around us are really going to ask is, are you going to be there with me? Will you show up when it gets bad? Will you show up in a way in which you risk getting some of what makes me sick and bearing some of what brings me down?

“I Can’t Make Time For Art”

“I Have Too Many Ideas”

The Book – It Is What You Make it