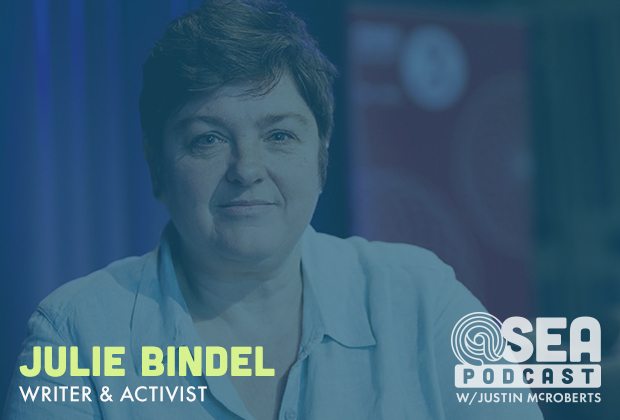 in 1981, in Yorkshire, England, Peter William Sutcliffe was convicted of the murder of 13 women over a span of about 5 years.

Police were criticized for there slowness of the investigation, the pace of which which appeared to pick up only after one of Suttcliffe’s victims turn out *not* to be a prostitute.

Among those leveling criticism was Julie Bindel, who is my guest on this episode of the podcast. A teenager at the time, Julie took part in a series of protests, including one in which the public suggestion was made my that, instead of women staying off the streets for their own defense, as was suggested by the police, men should stay off the streets in order to ensure the safety of women.

That kind of insightful and poignant expression continues to mark Julie Bindel’s work as a journalist and as a political activist.

She is also the author of two books, “Straight Expectations” and, more recently, “The Pimping of Prostitution: Abolishing the Myth of Sex Work.”

This episode was recorded during a live @ Sea Event hosted in Concord, CA earlier this year. It was part of a series of events, planned in partnership with The Center For Bioethics and Culture. You’ll hear CBC founder Jennifer Lahl describe the work and focus of the CBC during the presentation.