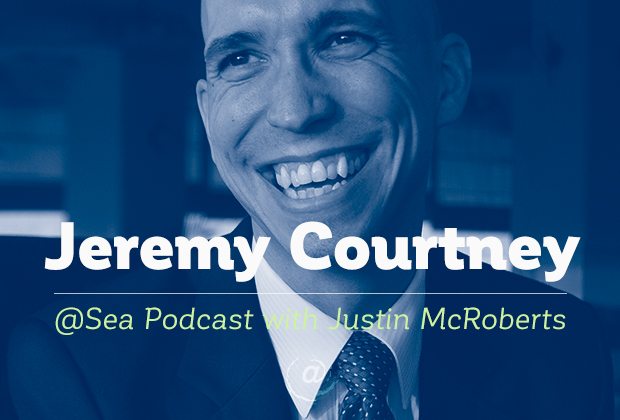 Jeremy Courtney is my guest on episode #6 of the @ Sea Podcast. Along with his wife Jessica, he is the founder of the Preemptive Love Coalition, an organization describing themselves as “a global movement of peacemakers changing the way the world engages polarizing conflict by confronting fear with acts of love.”

Here’s why I’ve asked Jeremy to be a guest:

On August 2nd, 1990, Operation Desert Shield began, called by some the Persian Gulf War. I remember that time period clearly. I found myself blocking roadways in my hometown with groups of friends, each of us carrying cardboard signs with anti-war slogans.

My response to that war was as emotional as it was uninformed. All I knew was that people my age, were dying violently and i reacted.  I didn’t know the politics or the sociology; I just knew I didn’t like the idea of war.

Fast forward over a decade to the mid-2000’s and meet Jeremy Courtney who, in the shadow of the Iraq War, which began in March of 2003, moved his family to Iraq. Not because they had a plan or mountains of cash to throw at a problem and not because they were giving in to an uninformed emotion. They moved to Iraq because there were people there.  The binary vitriol they Courtney family heard concerning the Iraq war didn’t touch the people it would most directly and dramatically affect, and the Courtney family wanted to touch those people.

That was the beginning of what is now called the Preemptive Love Coalition.

The @ Sea podcast puts you in touch with great culture makers because what they do deepens and enriches our lives… Jeremy’s work enriches many lives, including mine. I caught up with him between Preemptive Love operations in Iraq,