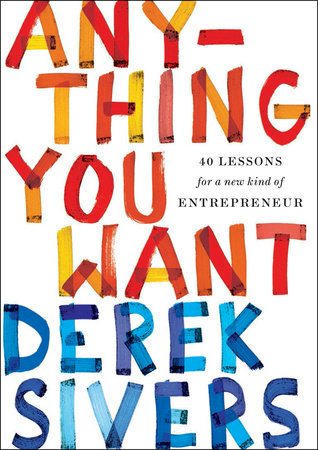 Full disclosure: I’m a Derek Sivers fan. I think he’s brilliant and I’m super thankful for his work. Truth is, had he not invented CD Baby, I’d likely not have made a living as a performing singer/songwriter. This book is, as it turns out, is a memoir of sorts, tracing the history and philosophy behind the worlds largest distributor of independent music.

Sivers is a very good storyteller and his stories carry the book. Rather than working from neat/clever thoughts and finding anecdotes to support those thoughts, his insights spring naturally from his narrative. he doesn’t have to work at all to make a connection between a business-mantra and “The Ancient Chinese Tale of Six Brothers” or some odd thing. So many books of this sort could be 50 pages shorter if the writer would just say what it is she’s getting after rather. Sivers’ stories and wisdom are one in the same. You know,.. the way real wisdom is generally gained.

A highlight for me was learning how the author measured his success. “How do you grade yourself?” he writes, “It’s important… to make sure you’re staying focused on what’s honestly important to you, instead of doing what others think you should.” In Sivers’ story, helpfulness is the only real metric for success. Early in the book, Sivers writes “Business is not about money. It’s about making dreams come true for others and for yourself.” It’s the kind of thing folks tend to say but not really mean. Thing is, Sivers’ business history is a study in this philosophy and the remarkably helpful culture he created at CD Baby is evidence of it.

“None of your customers will ask you to turn your attention to expanding. They want you to keep your attention focused on them.” Tim Grahl, in his book “Selling Your First 1000 Copies” talks about this same thing with the repeated encouragement to be “relentlessly helpful.”

I’ve taken to coaching artists to create what they create because they love the work itself… but to share/sell/ship it because they love their readers, viewers and listeners. Sivers’ focus on how to be helpful as a business-owner and CEO is a large-scale version of that same philosophy.

Final note: I emailed the author shortly after finishing his book to say how much I enjoyed it and learned. He wrote back the following day and asked me specifically how it helped. This is a book born out of practice. Sivers embodies his ideas and ideals. Yes, there are hundreds (thousands?) of books on creative entrepreneurship… but how many of them from someone who as fully practices what he preaches?

Wonderful book. Check it out.