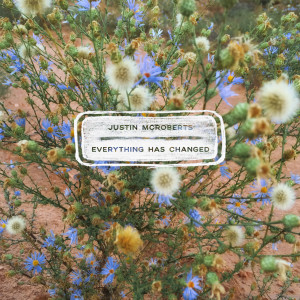 IS THIS THING ON?
The last time I wrote and recorded a stand-alone collection of songs was in 2008. That is part of why this collection, entitled “Everything Has Changed,” is such a joy. I feel like I’ve been away from this medium for a while** and now I’m standing on stage, leaning into the mic, “Check. Check. One-Two. How does this sound?”

Since 1998, my mission has been to help provide language for the process of faith and life. That’s how I best love my world, including you. I first started doing that by writing songs. In recent years, I’ve happily taken up book-writing and storytelling as my primary medium, which has been a blast. But as much fun as I’ve had learning to be an author, and as clear as it seems that I have a future in that direction, it feels really, really good to dig around in my soul and simply capture what I found there in song. After all, that’s where this whole journey started for me.

WHAT DID YOU FIND WHILE “DIGGING AROUND IN YOUR SOUL?”
These songs started taking shape during a three-month break I took last year. Over the course of those three months, I found myself telling folks “I’m in a season of transition” so often that, at one point, I figured it might be more expedient to print a shirt with that same slogan. That way, when folks asked me how I was doing, I could just point at the shirt and keep eating my donut.

I knew that answer was a stand-in for something I couldn’t see yet and by the end of my break, after serious reflection and counsel, I caught a glimpse of what that was. I found myself gravitating towards Heraclitus’ notion that “Everything changes and nothing stands still.” You may have heard it expressed more like “The only constant in life is change.” Now, while I suspect that might be a slight overstatement, it isn’t much of one. I’m 41 years old now and almost nothing around me looks or feels the same. Heck, I don’t look or feel the same. I have lost things I thought I would have forever and gained things I never would have bet on. These songs (and a few more besides) were written as a way of embracing that constant change and the uncertainty that comes with it. In so doing, I not only find myself less anxious about change, I also recognize and embrace the constants I have been given.

WHY ONLY FIVE SONGS?
As I alluded to earlier, I have a few other songs in my pocket, most of which are nearly finished and all of which I really like. But I have two main reasons for releasing an EP instead of a full-length album.

Reason 1 – This is how I listen to music now — in smaller batches. I’m guessing that’s the same for you. The pace of life at which you and I live coupled with the pace of new information and media just doesn’t lend itself to a long-digestive process. I wanted to give you something you could more easily chew on, digest and really fall in love with. This is 20 minutes of music – roughly the length of the average podcast.

Reason 2– In order to get into my second reason, allow me to peel back a layer and share a bit of my own process…

As you are likely familiar, the cost of making music (not just financial) vs the return gained by releasing it (again, not just financial) has changed dramatically. Those changes force some very serious and healthy deliberation. I have to ask myself  if I staying true to my mission. And, again, my mission isn’t just to make music; I endeavor to help provide language for the process of faith and life. I’ve generally done that through music, but the past few years have found me spending a lot of time storytelling, writing, teaching, speaking and retreat leading. Music continues to play a part in everything I do, but it isn’t as central to my life’s work as it once was. This is another piece of that “constant change” I see in and around me. And this particular change means that I’m watching to see whether or not songwriting is still a best and effective way to fulfill my mission and love you well.

I’m betting it is. And if I’m right, I’ll make plans to track and release that next batch of songs.

This is not the way I have done things in the past. But that’s why I wrote this batch of songs… because everything has changed.

Pick up the EP at iTunes
Or pick itup at JustinMcRoberts.com (where all other digital albums are only $2.99 through Sept.)

Special Thanks to…
Max Butler, Lewis Patzner, Peter Canton and Dustin Smith for skillfully playing,
Masaki Liu for recording and mastering,
Don Chaffer for mixing,
and, as always, Gregory Madsen for artworking.

—
**I’ve recorded other music since 2008, yes. But the context was rather different for those projects. In 2013 I recorded a truckload of songs (20 in all) to pair with my first book release. Those songs were intended to supplement CMYK. Before that, in 2010, I recorded a collection of cover songs, entitled “Through Songs I Was First Undone.”