This short quote (a parable, really) by Mr. Robot’s lead character Elliot really jumped out at me:

“My father picked me up from school one day, and we played hooky and went to the beach. It was too cold to go in the water, so we sat on a blanket and ate pizza. When I got home, my sneakers were full of sand, and I dumped it on my bedroom floor. I didn’t know the difference. I was six. My mother screamed at me for the mess, but (my father) wasn’t mad. He said that billions of years ago, the world shifting and the oceans moving brought that sand to that spot on the beach, and then I took it away. “Every day,” he said, “we change the world,” which is a nice thought until I think about how many days and lifetimes I would need to bring a shoe full of sand home until there is no beach, until it made a difference to anyone. Every day, we change the world, but to change the world in a way that means anything, that takes more time than most people have. It never happens all at once. It’s slow. It’s methodical. It’s exhausting. We don’t all have the stomach for it.”

In the revelatory moment when I finally take note of drastic changes in or around me, it can seem like everything happened in an instant. But most often what I’m noticing in that moment is a life-time’s worth of decisions and actions. Which helps me to see the decisions and actions I’m taking today in a larger (and painfully longer) context. 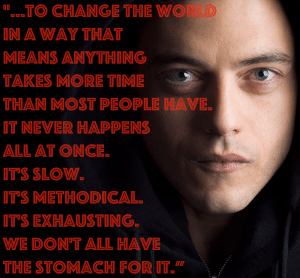 Picking up on Elliot’s parable about change… some of us have beaches worth of sand we’d like to move. Some of it is personal, some of it systemic/institutional and some of it is a confusing swirl of both. But very few of us get to move that sand with bulldozers and heavy equipment. Instead, making change happen means carrying small bits of sand in our shoes and hands and pockets; which not only means progress is slow but also that the sand gets all over. We find it in our laundry and carseats and carpets for weeks and months or longer.

Change happens slowly. It costs us. And we sometimes carry the residual effects of the process into aspects of our lives we never intended to take it. And as harsh as that imagery may be, I’ve also come recognize it as a sign of real change… of lasting change. The kind of change that happens in a flash has a tendency to last about that long.  When it comes to the things in my life that matter most and need serious change, I have come to believe the long process (which is likely the only process I have access to anyway) is worth it… and that it works.