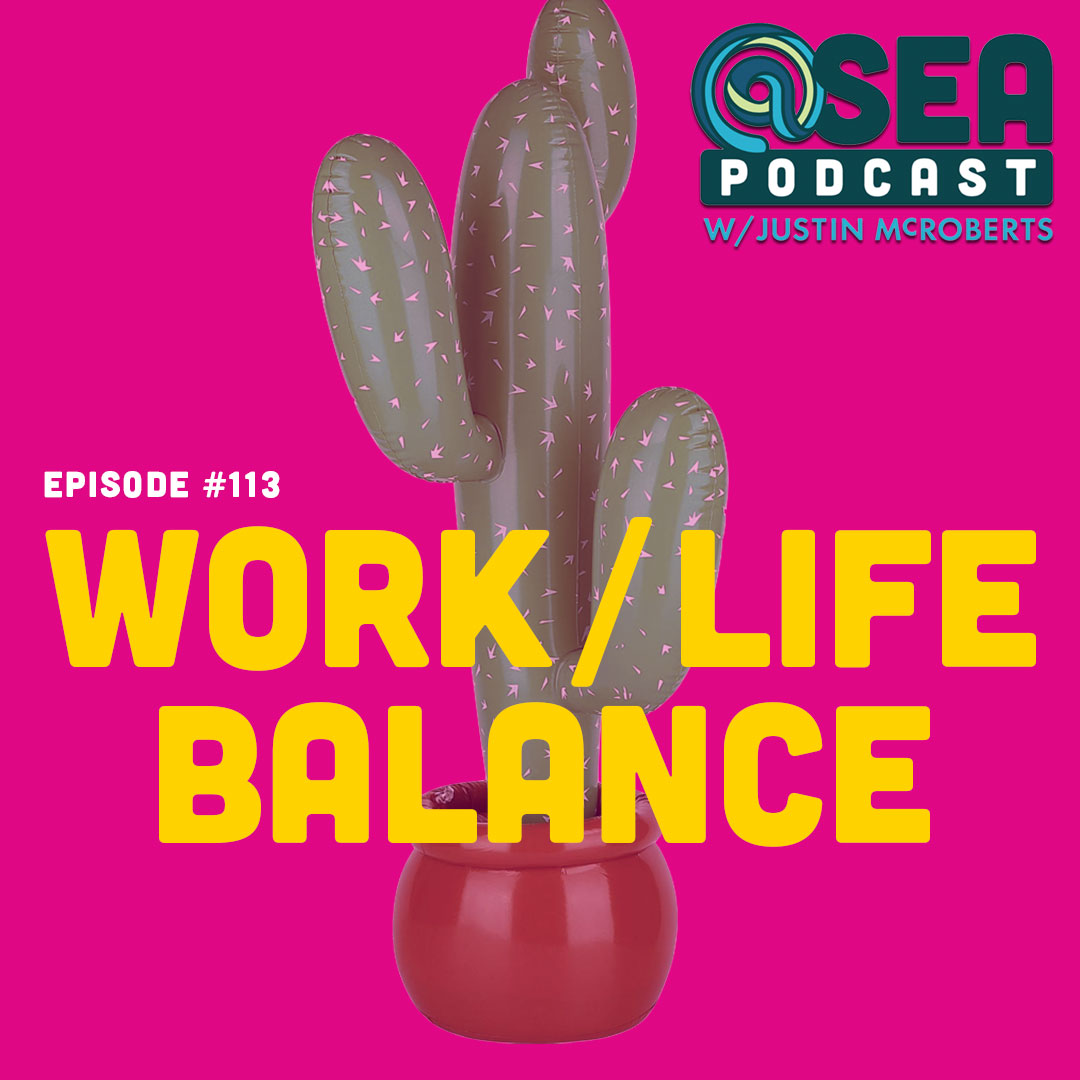 I want to spend a few moments dissecting and maybe even dismantling this phrase. This idea that comes up in coaching conversations and has come up for a long, long time. In my 20-plus years in pastoral ministry as an artist and is the phrase work-life balance. I’ve got a lot of issues with this. And not just theoretical, but more so as a practical reality. So I’ll start where I’m going to end and basically say that there is no such thing as a work-life balance, and more to the point, that the ideas that lead us to talk about work-life balance are not just toxic, they’re destructive, and they’re anti-human.

So life gets in the way of work; it puts life anything else that doesn’t work somehow in competition with life. Now with a lot of other folks with folks who work at nine to five jobs and cubicles, sometimes the way this conversation goes is that work is this necessary evil that I have to do to support my quote-unquote, life. And folks who live in that place for too long and wear themselves out. I don’t think there is such a work-life balance because I don’t think there is a division between work. And life work should be an outpouring of our whole lives. And life should be this menagerie of experiences, obligations, freedoms, and expressions enriched by the work we do with our hands and our time with talent. I bristle at the notion that work and life are somehow a competition or are separate things. They are intertwined. They’re not opposites. They’re in relationship with one another. The word balance is the other massive hang-up I have with this phrase work-life balance. I don’t think that’s a reality at all. I think that works in mathematics. I think it works with physical objects. But with a human life, I don’t think balance is a healthy goal at all, not even close.

Instead, I think about our lives, priorities, obligations, freedoms, and expressions. They work in seasons. I actually hear the word balance. When we talk about life, when we say work-life balance, what I actually hear a saying oftentimes, is that I intend to or want to somehow keep all of my relationships, all of my obligations, and all of my commitments equally happy all of the time. And that kind of commitment or dream or idea will tear you to shreds and leave you miserable, and leave most of the things in your life have done or done poorly. Instead, I think there are seasons for full investment in things at the cost of other things. In other words, and this is a really, really rough example. But there are times when I have to look my kids in the face and say I’m going to be gone for ten days. And I don’t get to be a full-time present dad because I’m somewhere else in the country or in the world, doing a work of my life that I hope enriches the world that I belong to. And that I’m called to for that, “season” for that ten days. So that two weeks, I can’t be in both places at the same time, that is a season in microcosm during which I have to be focused somewhere else. Now, panning back out. I actually think that happens over the course of years and over the course of months for sure. When there are times, and there are seasons when it’s actually important for you and me to look at what is happening in front of our faces and say, “This is the season in my life during which I’m going to have to focus on this particular aspect of my life at the cost of others. I have to invest in my work during this season of my life. Yes, at the cost of the time I would spend with my friends with my family, with my neighbors.”

And there’s a time to say that during this season, “I’m going to give myself over more completely to my kids, to my neighbors, to my loved ones, and to my friends to my community at the cost of the work that I could get done during that same time.” I don’t think It’s possible to do all those things all the time, equally well, on every single day. I think it happens in seasons. And as I’ve moved away from the idea of balance towards seasons, I found myself much healthier, much happier. And doing all of the things that I actually do with my time, my life, my talents, and my relationships far more joyfully because I recognize the season that I’m in, and I get to plan for the seasons that I know are coming.

Here’s what I mean by that.

Right now, we’re coming towards the tail end of the summer. My summers, because I’m a dad of a 12-year-old and a five-year-old, during this broad season in my life, during which I get to be a dad to a 12 and five-year-old, while my summers just are not productive work times. And because I recognize the broad season as a father, and the particular season, summer, I just don’t pressure myself the way we might have; if I was trying to achieve balance, I’m just not going to get as much done. What I also know, though, is that there is a season coming because I know my patterns, because I’ve been living in seasons during the fall and definitely as the winter sets in, where I’m going to be able to take whatever ideas pop up during this time. And they’re going to have their time, their attention. Because during the fall and during the winter, my emphasis changes. And during the winter, I get to take a deep dive into some really interesting projects. I know that I’m going to have that time. So because I know I live in seasons, I’m not bummed out that during the summer, I’m not being as work productive. And then in the winter, I know I can be more project-focused, I can dig deep into some creative idea that I’ve been maybe dreaming about, and have tension about through the summer and early fall. Because I’m living in seasons, I know that there’s a season coming for the things that I want to do, regardless of what that thing is. I want to spend time with my kids and have those days when they know that they have me all day long. And I’m not going anywhere. I have nothing else to do but have fun with you. I also want to give myself over completely to the projects and the ideas that dream in my heart, my soul, and my mind because I want to make beautiful works in the world. And I get to give those projects as ideas, actual time, because I know there’s a season for them. If I was living with the promise, the expectation of a life-work balance, I would steal joy from all aspects of my life, instead of giving all aspects of my life their due time in the season