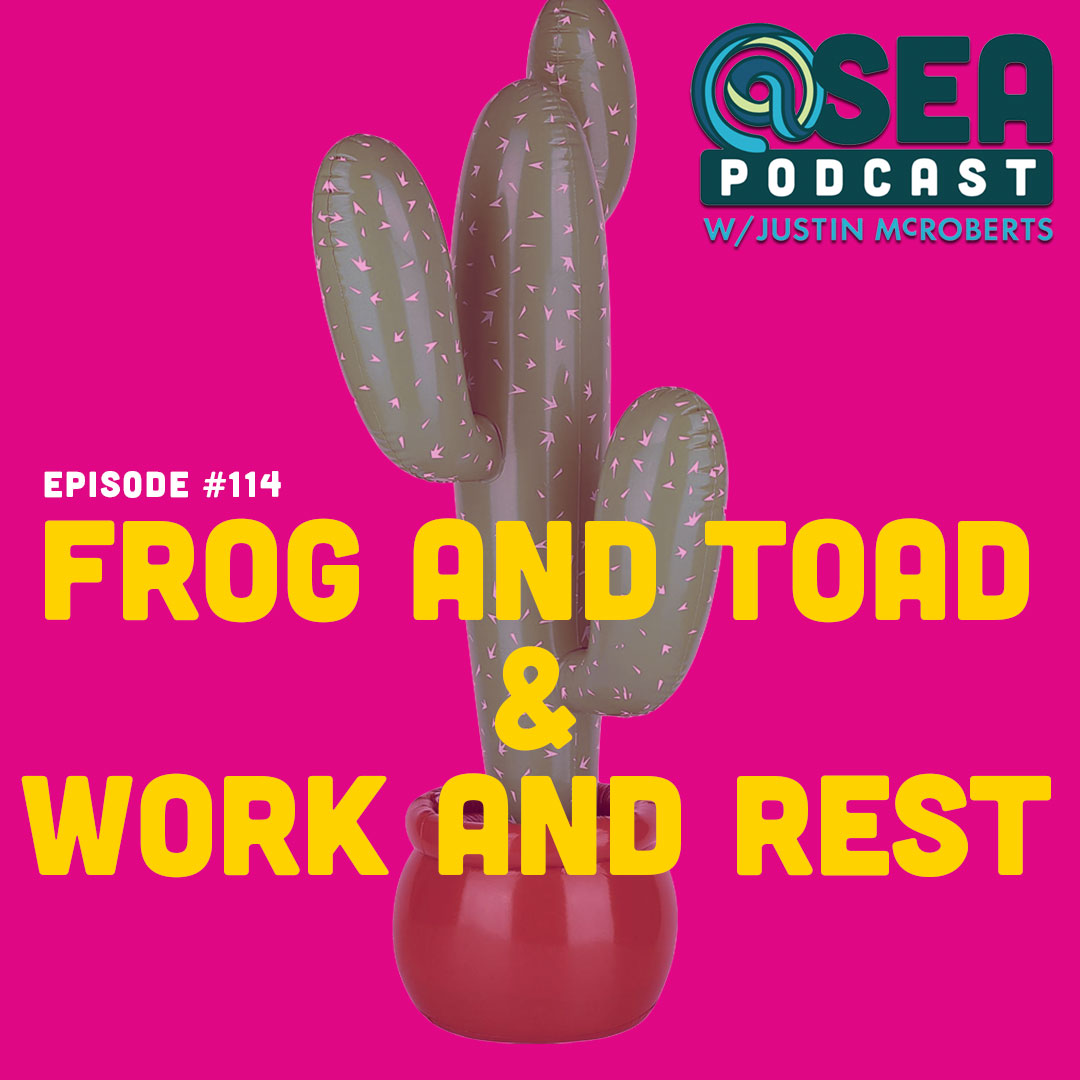 You’ve probably had the bad experience that I had recently, that I’m about to tell you a story about, in which when your mind is already focused on something.

You’re already thinking about something regularly, and you start noticing it or connections to it everywhere. That happened the other night while I was reading a book to my daughter to help get her to sleep. I am in the process of editing and finishing this book called Sacred Strides, which will come out in 2023, about belovedness, about discovering my belovedness through both rest and work. My daughter, who’s five right now, picked a pair of stories for me to read. And one of those stories was Lobos Classic Collection, The Adventures of Frog and Toad. I don’t know how familiar you are with the stories, but they’re brilliant. They’re hilarious. They’re well written, and there’s wisdom in the stories that sneaks up and pinches me every once in a while, including this moment. So the story specifically is called the garden. And in that story, Toad notices Frog’s garden, and it’s going really well. And he asks how he, too, can have a garden. He wants a beautiful garden. So Frog, in all his generosity, hands, Toad some seeds and tells him that like once he plants them, he’ll have a garden, and then he uses the phrase quite soon. So Toad immediately runs home to plant those seeds. And then, just as immediately, he starts yelling at those seeds to sprout and grow. And predictably, they don’t. Frog comes running in response to all the noise that Toad is making because he’s screaming at the seeds. And very kindly lets his friend know that you can’t scream at the seeds. “You’re going to scare them.” So he tells them in a number of ways that he needs to give those seeds time to grow. But then Toad does the opposite. And it goes through any number of ways to try to get those seeds to grow on his own with his own efforts, he reads them by candlelight, and they don’t grow. He sings to them, and they don’t grow. He reads them poetry, and they don’t grow. And no matter what he does or how he performs, he simply can’t manage to get the seeds that he just planted to grow. He does, though, in his efforts, managed to wear himself completely out, and he falls asleep. Eventually, he’s woken by his friend frog. And it looks to the ground and finds that, as promised, those seeds had sprouted and began to break through. And then the conversation goes something like this at last shouts, “Toad, my seeds have stopped being afraid to grow.” And now says Frog, “You’ll have a nice garden too. Yes, Toad.” It was hard work. See, that’s pretty much how my journey towards belovedness in work and rest went. I was committed really early on to newness and to growth. Because I came through the doorway of evangelicalism, and I’m thankful that I did. My initial practice of faith was galvanized by an energized and by the desire to build to make to pass on to communicate. That’s where all the energy was.

And that desire to work well and effectively was a good one. But I misread the invitation See, I’ve been handed those seeds of the reference, the story of time and talent and passion, and invited into a process that would actually provide a loving home for my entire soul. And not just the use of my talents and my gifts and strengths, I came into the doorway of usefulness. I was told and taught that it was essential and good to pass on what I had been given, and it is, but I wasn’t invited into this just to be a good instrument for the machine. No know my strengths and talents get to participate in the good work already having like seeds planted in the ground, I get to participate, I get to share but actually get to participate and share. I don’t get to make it happen – No matter how I perform, no matter how I execute, no matter how loud I am. I can’t shake seeds awake and into growth that aren’t ready and whose time has not come. What I get to do is they get to share in that process, I share in the story, and I get to share in the work that is already at hand. This is a massive shift for me in my life, and it’s the one I am now trying to pass on as best I can and books like It Is What You Make Of It. And the upcoming book called sacred strides. That there’s a word Already at hand that you and I are invited into to share in not because you’re useful, although you might find yourself really helpful times, but because you’re actually beloved, what I’ve come to believe in and through the practice of work, and rest, is that the one who holds all things together has invited you and I into this beautiful process of things being reconciled, made right more whole, and into a story that actually does have a good end – that I don’t have to function with the anxiousness of proving myself, much less the anxiousness of having to get it right, less all things fall apart. What I’m beginning to hear in the work, and in the rest, is a voice that doesn’t say something like, “Come on, we’ve got work to do, we’ve got to get it done, or this is all going to hit the floor.” I hear something more like this, “Slow down, wake up a little bit, and see what’s already growing. Because that’s how I’ve made this all to work, and I want you to join me in it. No, I don’t want you to stop singing, and I don’t want you to stop reading or playing or writing. I want you working while knowing that your work is a way to share in this life with me, with yourself, and with those you love. I also want you to know that when you don’t work, either because you can’t or because you’ve happily chosen not to that, you still share in this life with me yourself and those you love me the growth and newness in your soul and in mine, as well as the growth and newness in the soil that you and I work on.” Be an expression of an outpouring of who we are, rather than an anxious response to what needs to be done. We are beloved ones, invited into a work of love by one who loves us.