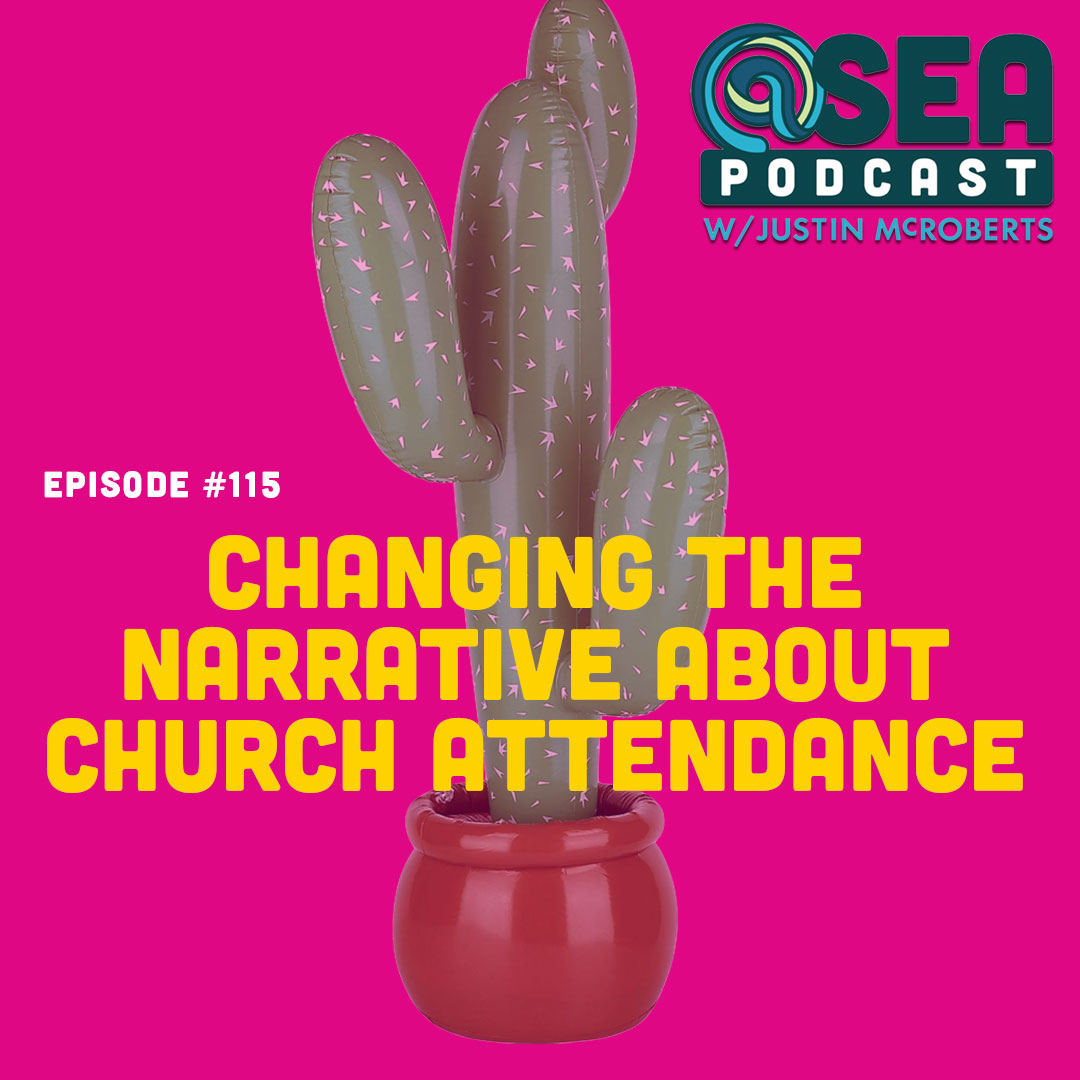 So I’ve been really enjoying this new feature of the podcast, taking a question from my Monday q&a sessions at Instagram, and digging just a tad deeper into one of those questions, specifically, those questions when you seem to resonate with those questions and my response. This past week, I got a question that I’ve been around and asked a lot as a question by somebody who asked “Why do churches struggle with attendance?” It’s like I said; it’s a question I’ve been around for a long time. I pastored or helped pastor church for 20 years, and questions about attendance and why people show up or why they don’t show up. Pretty regular, comprehensive conversation, especially as time went on. At some point during my tenure as a church staff person, we were looking at numbers gathered by experts in church culture, church attendance, etc. And the numbers that jumped out to us were that while the population of the United States of America had grown by something like 11%, church attendance had fallen off by something like 25 to 27%, I don’t remember the exact source.

But those numbers stood out to us as we’re having these conversations early on. And what the numbers did was force or invite, forcefully invite a pretty serious set of questions that led to a good long season of self-examination. And during that season, the question about church attendance became far less general and way more specific to us. Because what we discovered during our soul searching was that particular cultures, particular cities, and particular people’s reasons for attaching themselves or detaching themselves for showing up, for not showing up, for never coming for never coming again, tend to vary from moment to moment, season to season, sometimes year to year or week to week, and certainly culture to culture. They were highly specific reasons. And there were commonalities between stories we were hearing from other pastors in different parts of the country. But the particulars were actually really important because, after a moment or two, we didn’t want to try to deal with a trend. We wanted to care for the people in front of us. That’s what we came to; over the course of that season of self-reflection, I didn’t want to fix the problem of church attendance. I didn’t want to solve the riddle of why people were not going to church in general.

In general, I wanted to know how to care for the people in front of me, how to care for how to minister to them, and how to be a pastor to the folks right there. In the city that I belong to, it became specific because it’s supposed to become specific. The general question about church attendance as a broad trend can be helpful only to a certain degree, and then it just becomes really distracting. And in that distraction, too many of us get suckered in by these grand narratives about what’s going on. And some of those grand narratives are flat-out dangerous and ugly, which leads me to this. You may have heard it said that this is a generation of people who are leaving God, who have turned their back on God, who no longer desire the things of the kingdom, which puts the entire onus on what might be happening in the hearts, the mind lives, the bodies, the households of the people who no longer show up to the particular product we have been doing out since the 1930s that we now call church the issue is with them, there’s something wrong out there that they don’t show up here. I would like to flip that script. What if we’re not talking about people turning their back on God? What if we’re talking about people who no longer see God in particular ways that our particular expression of church describes, hosts, or celebrates, and that what isn’t happening is that they’re leaving God and no longer want anything to do with the things of the kingdom or the things of God, but instead, these are people who are looking. And if they’ve turned their eyes anywhere, they have turned their eyes into spaces where they hope, sometimes actively, sometimes unconsciously, they hope and expect to be met by a God who is everywhere, God who is not limited by the particular expression of a particular culture of people who have been doing church in a particular way since the 1930s 1940s.

What if what we’re bearing witness to is a kind of awakening, a challenge and an invitation, a somewhat forceful invitation? For those of us who have lived in and desire and desire to live in church leadership to take a step back. And instead of asking the question, what is wrong? Ask the question, what is happening? It’s a more hopeful question to ask the question of what is as opposed to why isn’t the way it was the question of where are people headed, as opposed to why are people leaving, it does two things for me really, specifically, as a human, as a Christian, as someone who desires longs to actually lead people that actually presented an image of the people that I want to love, as mature and whole, and real and complex? People who are worth spending our time on as opposed to mindless consumers who just need a better pitch so that they might come back? No, what if there’s something truly good, beautiful happening in the hearts, the minds of souls, the bodies of households of these people, and they’re on the search for a way to connect with God that makes sense of what’s happening in their lives?

Also, if God is everywhere, and God is everywhere, doesn’t that free me from the responsibility of creating a place that is sufficient for clarifying the work of God for someone? Instead, I can be more like Philip, who, in the eighth chapter of Acts, comes alongside the chariot of a man from a completely different culture with a completely different language and who is having a unique experience of God right there in the chariot, and who stood there long enough to listen to pay attention to what was happening in the chariot, before then being invited into that chariot that foreign space to which Philip had previously not belong? There wasn’t Phillips chariot. It was The Eunuch’s chariot. It was the Ethiopian’s chariot. And as he sat in that chariot and asked questions about what the unit was experiencing in reading, he was then invited into that Unix process because God was up to something before Philip showed up. What if the challenge in this moment is not to figure out what we’re doing wrong in our institutions, in our spaces, and in our methodologies, but instead to figure out what good true, and beautiful thing is happening in the world around us, that people are being drawn to that we might come alongside some of these chariots and ask questions about the wild and loving and endless and perfect work of the Divine manifesting itself everywhere.