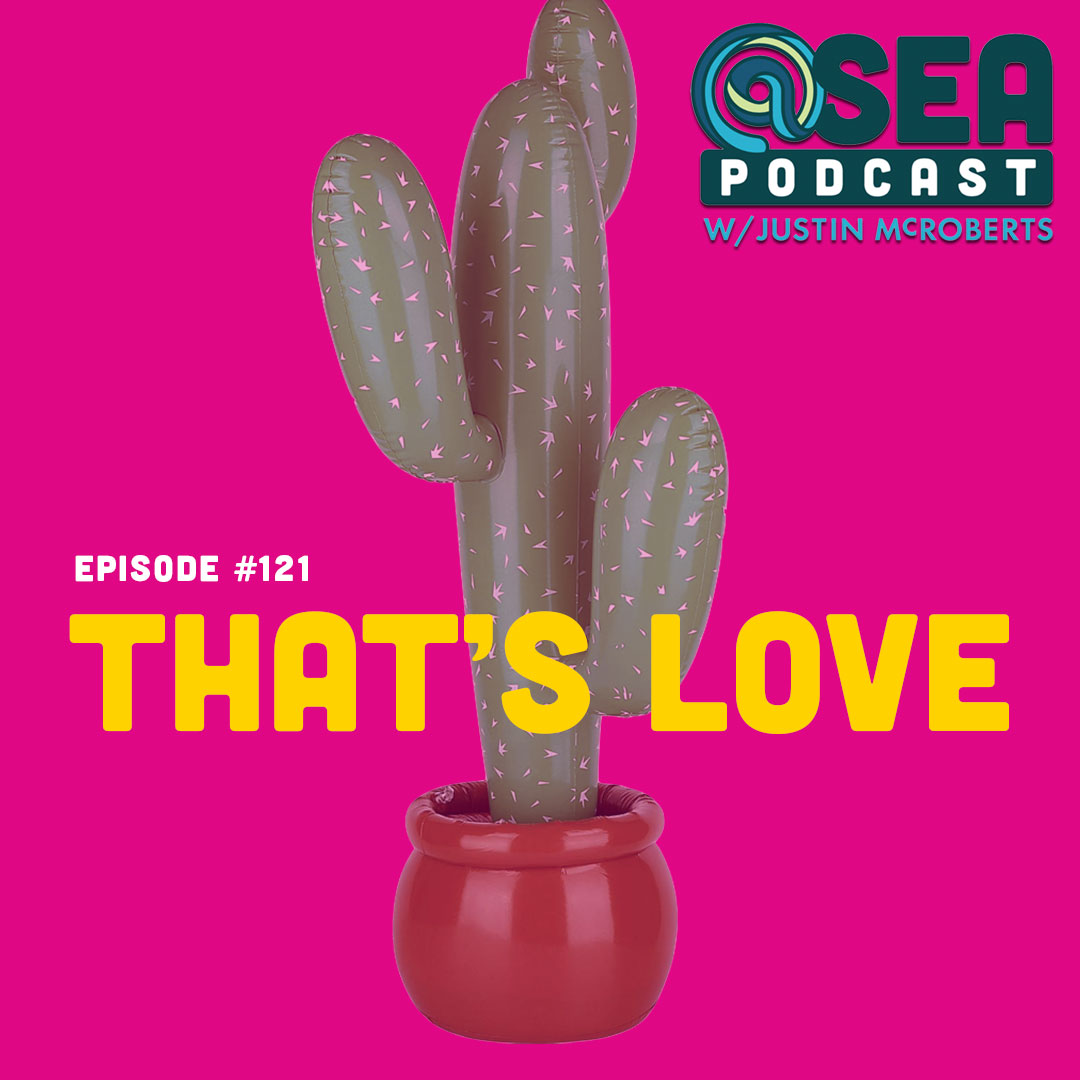 And I’ve been waiting to write some kind of follow-up to that song pretty much since I released it. It was a song that meant a lot to me at the time because I was trying to publicly and personally redefine the word and my experience of the word love for myself. And for people that were interested in paying attention. To me, it was this hopeful attempt, I guess, to push back on the idea, or the constant suggestion that love was a feeling. And that just hadn’t been my experience. Certainly, there have been feelings involved, as it were. But love, while it included feelings was just more complex, it was more difficult. It was harder, it was Messier. It was just bigger. And I wanted to write something that actually spoke to maybe the more difficult and messier and poetic slash practical elements and aspects of love. And so I wrote this song that is, as it’s recorded, both Sung and screamed, which was part of my experience of love. Here’s a clip of that song and how it comes off as it’s recorded.

Now, among my existing listeners, love as a song had some legs to it folks really resonated with the song. To some degree, I know they resonated with the energy of the song in this sort of like middle space between folk, and rock. But I think actually, no, my listeners really resonated with that particular expression of love. At what point shortly after the album, that that record was on was released, the song was covered by a rock band, like an actual rock band, and I think actually found a bit more of a home sonically, with this band, they were called Kids in the way. And the way they interpreted the song, it was definitely more full-throated, it was definitely more screaming. And there were electric guitars and drums and the whole mind, and it definitely felt more like that’s the spirit of the song. But I’ve got to say that the peak moment of that songs life, and, and the place it found its home in at least in what I meant by it. When I recorded it came when I was asked to sing that song at a friend’s wedding. Now, you just heard a clip of the song and how it comes off. Like I said, it’s sort of screamed and sung at the same time. So imagine, if you will, sitting at the wedding of a friend of yours, and watching the ceremony proceed as it normally does. And then coming to the moment of communion, where the pastor or the preacher, whoever is facilitating the moment, invites the crowd to take a few moments of reflection, while the couple takes communions. Normally this very low-key, almost contemplative moment in the ceremony. But that was the moment that my friend asked me to step up to the mic and play that song. Now, I’ve got to be honest. And if you’ve been around me long enough, you know, I’ve definitely had some moments when what I was doing up front, musically just didn’t go over with the crowd that I was in front of this was something entirely different because it wasn’t just a matter of distaste, there was utter confusion among the attendees of this wedding. And then, during the reception, this friend of mine who had asked me to play that song, during his ceremony, got the chance multiple times to answer the question, because people came to him and said, Hey, was that song he was supposed to play? Did Justin just pick a random song and play it instead of something more appropriate to the moment and what he said was that that had been his experience of love. And he wanted there to be a moment in his wedding ceremony. That said, this is what love sounds like and feels like when it’s been real. For me, that was a peak moment. And that songs life, it was also a peak moment in my understanding of the practice of the expression of in the experience of love.

A few years ago, I was asked to lead songs and teach at a church community that I was actually somewhat unfamiliar with. It’s a thing I don’t do very much, but on the suggestion of and the request of a friend. I planned a few songs to lead and I planned a teaching around their requested topic, which was the love of God. Now, they had suggested and requested that I turn in my notes and my slides ahead of time because they were unfamiliar with me and they wanted to make sure they knew what I was going. So I turned in my notes well ahead of time, and I turned in the slides for the songs that I was doing, most of which were traditional. And again, if you’ve been around me at all in the last several years in See me song lead. I prefer to lead older traditional songs. And this one particular song that I had included in my setlist, they really wanted to do a different version of It’s a song called Nothing but the blood of Jesus. It’s a very traditional older him like song that’s relatively familiar with folks who are part of the Christian tradition. What they said, though, was that they wanted to do their version of this song. And again, because this is a traditional song that’s been sung, and led for many, many years by many, many people in many different contexts. It’s a traditional classic song and wanting to do your version of a classic song is like saying, I’d like to do my version of Nikes. Yeah, that’s called a knockoff.

Well, when they sent me the lyrics back to the song, their version of this song, they had replaced the word blood with love, so that the song said nothing but the love of Jesus rather than Nothing but the blood of Jesus explaining that they did not like the violent imagery associated with blood. And at first glance, I understood Oh, yes, I get that that’s a little bit gross to be singing about blood. But then I actually thought back to this moment, when, during my friend’s wedding ceremony, at a point in which we were supposed to have a contemplative moment, during communion, to reflect on the love of God for them, they asked me to sing a song that actually shook the room a little bit about the nature of love. As they stood behind me eating the body, and drinking the blood of Jesus, I sang a song that was a bit toothy-er, a bit messier, a bit more violent. In his epistle, John writes that this is how we know what love is that Jesus Christ laid down his life for us. And we ought to lay down our lives for our brothers and sisters. When John goes to redefine what love is, he actually references the violent moment of the cross. And I honest to goodness, think there is something really important about that definition of love. That certainly there are feelings involved, that certainly it can be a thing that feels good and brings light and joy and happiness. But that if love is to truly be love, it has to meet our humanity, in the whole of our humanity in both our high peak glowy fascinating, glittery, big-eyed, sparkly moments. And in the utter, destructive, terrible depths of our existence, our practice, it has to meet us in both our glory. And in our depraved violence, if that’s the kind of love we’re talking about, I’m in. And if it’s not, if it’s something more sentimental, that’s fine. It just doesn’t meet me as a whole human. If the love of God is to truly be the love of God, for all of humanity, must it not, in some way, speak to the violence that is also true about our nature, which is why I love the image of the cross as an expression of love. It’s why I love the life of Jesus on the whole, including the cross, as an expression of love. Are there adorable, cute, big-eyed puppy-like moments? Certainly, there are. And there is also the cross in Oakland, California, just by itself. Last year, there were 125 murders. And that’s a small chunk of the nearly 17,000 murders that took place across the country. And then earliest statistics from this year suggests that there are at least 16 gang-related violent crimes perpetuated in Oakland every single day. And that’s part of what it looks like. To be human and to belong to the human race. So as I see it, if love is to truly be the kind of reality and power the human heart desires, and not only can’t turn a blind eye, to our more violent nature, it has to look at that nature, square in the face and say I can handle that has to look at least in part, like the cross.

So 20 years after the release of that first song called Love, I finally found some words and a melody to really communicate those thoughts in the song is called that’s love. Not the most imaginative title, but it works. And I don’t screen this time, but I think the energy is still there. It’s still a thing I want to see. It’s still a thing I want to be Leave about the love of God that is available to me and then helps me make sense of and make something good out of what it means to be human